So after yesterdays advice we took the kids to the hall of fame to meet with some of the other artists and see what was going on for Ntrprnrs 5th Birthday. Everyone was chatty and working hard, so we set the kids up with some pens and pads and got taking some pictures. The peice we saw going up yesterday was finished (see previous posts for a pic) and looking great. (check the map below to see how to get to the Hall of Fame). 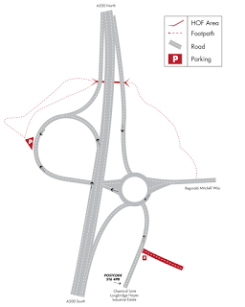 Met a photographer who has spent a great deal of time and effort taking photos of graffiti, ill post a link to his flickr later. Pondered the meaning of different types of graffiti and ideas of recognition, showing off and gaze.. who do they do it for? themselves? other artists? the general public? As soon as exams are over Ill start reading. Ive got a cultures of consumption exam on 16th May, Im focusing on culture jamming for that too so will be reviewing Adorno, Horkheimer and the Frankfurt School. Its becoming more apparent that graffiti is easier to access than those who culture jam, initial accounts from artists are that they just like to paint; some are graphic designers etc. But, its still got me wondering, if its just to paint then it would be on canvas, paper etc.. why spray on walls in public – there is definately more to it than that. N x